I was born in Buffalo, NY in the early 60’s. In the mid 70’s my dad was transfered to Portland, ME so we moved to Windham, ME. I went to a 2 year college in Presque Isle, ME.

I moved back to Windham, then Portland, then Gorham, and finally Westbrook.

I was a paper boy for 3 1/2 years. I worked at 2 campgrounds, Dairy Queen, Kentucky Fried Chicken, Gorham House of Pizza.

Later I did auto body repair for years. I worked for Rowe Ford in Westbrook for 16 years (a great place), and Ultimately Ernie’s Cycle Shop.

When I was a kid I put a front shifter + rings on my BMX bike. Two years later huffy came out with the same thing.

We are in the process of creating the “American Cycle Speedway”, an all out sprint on a dirt oval flat track with a BMX style start gate. Check the website for race dates. 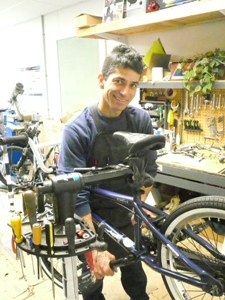